As I was wavering on daring to blog about how I celebrated the anniversary of my retirement, Bryan Williams’ teaser bolstered my nerve. “Coming up: Another state approves recreational marijuana sales,” his NBC Nightly News promotion promised. Settling in to watch the segment, I learned that it took Washington 20 months from when voters approved sales of recreational marijuana to actually open stores. A 65-year-old grandmother was first in line at one of them.

Last week, on the second anniversary of my retirement at age 65, I was vacationing in Colorado, the first and only state so far to legally sell medicinal and recreational marijuana. Never could I have imagined that I would forego Chardonnay for Canna Punch for my celebratory toasts.

All that day the devil on my shoulder was relentless: “Hey, it’s legal here!” “Why not?” “What an opportunity!” “When will you have this chance again?” “Do it.” Not to mention the urging of friends, such as this text: “Have u gone to a pot shop? You HAVE to so u can tell me about it!”

So, we did. All of us about my age. All with our individual memories of the free-spirited ‘70s, regardless of if we tried weed then, or not.

Mostly, we were curious. And naïve. First stop: A store that sells marijuana for medicinal purposes only. 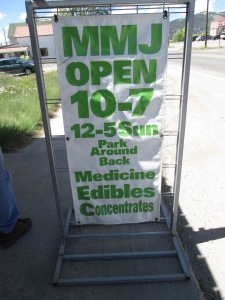 Because we didn’t have prescription health cards, the clerk was not permitted to show us any goods. Instead, she eagerly directed us to their “sister store” a few blocks away.

Off we went, in search of adventure.

The new retail store was airy and attractive. Artwork for sale graced the entrance of a spacious room, where glass cases displayed the merchandise. Except for the rolling papers and pretty pipes, we were pretty much clueless about the wares. A cute young clerk with a pixie hairdo and headband, channeling hippies long before her time, explained the kinds of Cannabis for sale—chew, sip or smoke—and the state laws that govern it. Edible marijuana included candy that resembled gummy bears. Drinkable weed doubled for fruit juice. 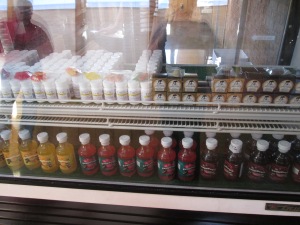 Jars of smokable pot had such labels as Alien Fire, Purple Urkle and Lucy. 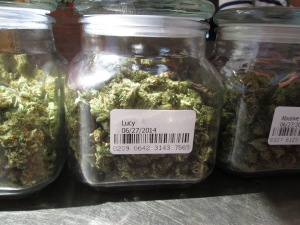 Go for it. It’s legal here.

Just to say we did it, we purchased one bottle of Pineapple Mango Canna Punch, a little more than a pint, to share among the four of us. Drink one ounce at a time and wait at least a half hour in between, the clerk cautioned.

Safely “home” on a deck with a spectacular view of enormous peaks at sunset, we all experienced a real Rocky Mountain High. 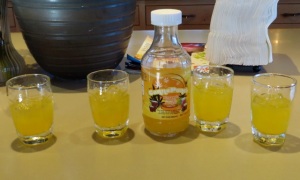 The drink was quite fruity with a distantly familiar undertaste. 😉 It took three rounds to feel any affects, all of us somewhat differently. For me, several minutes of giddiness turned into a wooziness reminiscent of the rare occasions decades ago when I took a few drags. I didn’t like that stoned sensation anymore this time … not sure if what I was saying was what I was thinking, and just wanting to curl up and sleep. Pot is not for me.

Although I’m in no rush to do that again, I have long supported the legalization of marijuana, particularly medicinal, if it is carefully regulated. According to the NBC news report, Washington already fears a pot shortage because of the scarcity of legal growers. And since selling marijuana became legal in Colorado in January, sales reached $70 million and the state is seeing a reduction in crime and increase in tax revenue and tourism.

With limited medicinal uses approved and plenty of talk about more legalization in my state of Florida, recreational marijuana sales could be in our future. Likely not in time for the third anniversary of my retirement next summer, but that’s just fine. I’ll take the glow of a Chardonnay buzz any day.

Retired and relishing the time to write about anything concerning people 65 and older, which is everything.
View all posts by Lorrie DeFrank →
This entry was posted in 65 plus and tagged Colorado marijuana laws, drinking marijuana punch, legal marijuana sales, legalization of marijuana in Florida, seniors and marijuana, seniors and pot, taking the opportunity to try legal marijuana, that stoned feeling. Bookmark the permalink.